Last December, the artist Jeffrey Poirier mandated us to enlarge a fossil discover in France more than 40 years ago. Found by his father on a construction site near a highway, we classify the fossil ‘nautilus‘, a kind of cephalopod. During the construction work, we dug deep enough to reach a sediment bed of an ancient ocean. This fossil is now damaged because it has chipped when Mr. Poirier tried to remove it from its fondations.
From Quebec, the artist had an exhibition at the ‘Maison de la Culture Frontenac’ from December 9 to January 17th. On the theme ‘ These tricks are not going anywhere ‘, the exhibition is composed of two sculptural pieces, one showing the prowess of technology and the other describing the passing modernity.
For its contribution to the project, USIMM had to scan the damaged fossil of 4 inches and enlarge it at 72 inches wide in high density foam. The surface is smooth which allowed the artist to sculpt in the material and add some details. 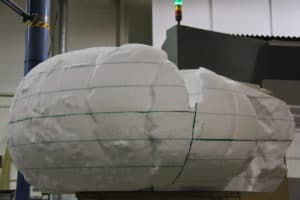 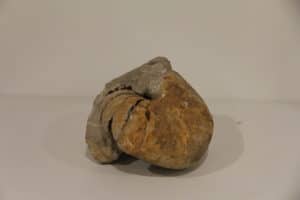 Jeffrey is particularly interested by the foam material in the industrial environment due to its temporary utility but still unique. He is also fascinated by the quality of the raw material attached to the insulation value of an artifact. In addition, the alveolar appearance and product malleability allows him to create and transform any artistic work which will make his projects exclusive.

Jeffrey Poirier, the artist
Born in France in 1986, he is now living in Quebec city were he obtain his master degree in fine arts. He realized many exhibitions around the province and in France. Fascinated by raw material, Poirier get is inspiration by basic elements to build his works.